Last weekend it was the virtual London Marathon which replaced the cancelled in-person event scheduled for Sunday. I quite liked the format, the rain was pouring down here in Battersea park and as I cycled through to the gym I was surprised to see it packed with runners. The virtual event worked by having the runners download an app which tracked your time and distance. At the end you took a selfie and you get your medal in the post.

I really liked the inclusive nature of the format, instead of just people cheering on from the sidelines many runners had friends and family joining them to jog a few km together. I think this is good for inspiring people to take part as you could have your kids cycle or jog alongside for a bit and anyone else in the park can’t help but be a little motivated seeing the runners. For the actual runners it is not so great though as you have long stretches with no one offering support and my one friend had to run 2 extra miles because the app froze. So anyone who did complete it on Sunday needs some extra credit and respect for the awful weather conditions and special circumstances.

Anyone can run a marathon, almost literally as seen in this article on the 11 most extreme marathon runners which includes a 430 lb sumo wrestler ( 31 stone – 195 Kg) and a guy who is over 100 years old. Whether and how you should do a marathon comes back to a few factors.

For starters, what is your definition of running a marathon?  The sumo wrestler did it in 12 hours, that meant he pretty much walked the whole thing. For me, running a marathon means running it without stopping, personally if you are not coming in somewhere around 5 hours or below I would advise you to work on your speed before steeping up to marathon distance.

But back to the main point, anyone can do a marathon, it simply comes back to the how you handle the main problems of training for such an event.

When considering whether to run a marathon the main issue is simply injury avoidance. This relates mostly to when you should target a marathon run, as in how many months you should give yourself? Assuming you have the motivation to get the sessions done then this can be answered by the following equation:

Current Fitness – This means how far and how quickly can you run currently. If you can run a 1.45 half marathon you will need hardly anytime to train for it compared to someone who cannot yet run 5km continuously.

Goal Time – As mentioned, if you do not have a specific goal time then it takes some of the pressure off. However, it is still a long way. I have helped many people train for the Moon Walk in London which is one of my favourite fitness events as it has much less injury risk than running. Either way, 26.2 miles is a long way.

Injury Risk – Around 2% of people (1 in every 50) who start a marathon fail to finish it from injury. Many more do not make it to the the start line for the same reason. There are four main factors that affect injury risk:

– Disposition to Injuries: Some people never get hurt or feel pain while others are always niggled with ankle, knee or hips issues. This is due to joint alignments, imbalances and the interplay with your running technique. This is especially important when running with fatigue.

– Body weight: The heavier you are the higher the risk of injury from extra compressive forces. This is compounds the injury risk if have a susceptibility to injury.

– Pre/Rehabilitation Programme During Training – While most people start off fine with their body as the distances get increased, especially over half marathon length in training it really starts to create stresses, tensions and imbalances in the body. This can be nicely managed with a rehabilitation programme to do on non running days.

– Time Until The Race – If you put yourself under a time pressure then the chances of injury rise. You will be forced to stick rigidly to a fairly aggressive plan that increases volume quickly. This is just a little more risky than a plan where you can delay runs by a few days if stiff and increase the volume more gradually.

With so many factors at play it is hard to give advice about how long to give yourself.  Using my goal time of sub 5 hours at least then for the average person I would say 12-18 months if you cannot run at all currently.  If you run 5km in more than 30 minutes then 9-12 months, if you can run a 5km in 25-30 minutes then 6-9 months. Below 25 minutes for 5km then less than 6 months would be possible. Factor into this injury susceptibility and excess weight.

This of course is just general rule of thumb, David Goggins ran 100 miles weighing 260 lbs (19 stone – 120 kg) after not running for a year. Valid, he did pick up a stress fracture in his shin at around 70 miles….though he carried on.

Outside of physical issues outlined above the main personal consideration is whether you are prepared to put in the time and dedication to run. Realistic requirements for the average person is 2-3 times a week running, which towards the actual day will involve a run of 3 hours plus every 1-2 weeks. You would also need to put in rehab time sessions on off days if susceptible to injury.

As discussed above the main issue of when to run comes back to giving yourself adequate time to train safely for it.

Where to run comes down to logistical issues. In the UK the London Marathon is head and shoulders the most popular marathon with 6 people applying for every 1 ballot place. If you do not get this then you can go through various charities but they often come with £1000+ minimum fund raising target. The reason there is such demand is that the London marathon is one of the few 26.2 mile courses where you have people cheering you on every single step of the way.

If you can avoid the lure of London then there a over 100 marathons in the UK every year and almost all of them you can easily get a space. It is also popular these days to go abroad to run one with there being all sorts of runs across Europe and further a field. I have watched the Dubai and Brussels marathons during my travels.

Despite the restrictions from corona virus running is gradually coming back, I had two clients compete in triathlons last month and come the New Year I would expect a full running and marathon programme to be scheduled for 2021. Albeit perhaps with some modifications, e.g. the London marathon is in October next year and not  April.

If you are thinking of doing a marathon I have helped numerous people over the years as well with the Moon Walk. So get in contact for more information on how you can get that finishing line medal.

Photo – I usually play the drums to support the runners at the London Marathon last Sunday with London School Of Samba. This photo is from 2019. 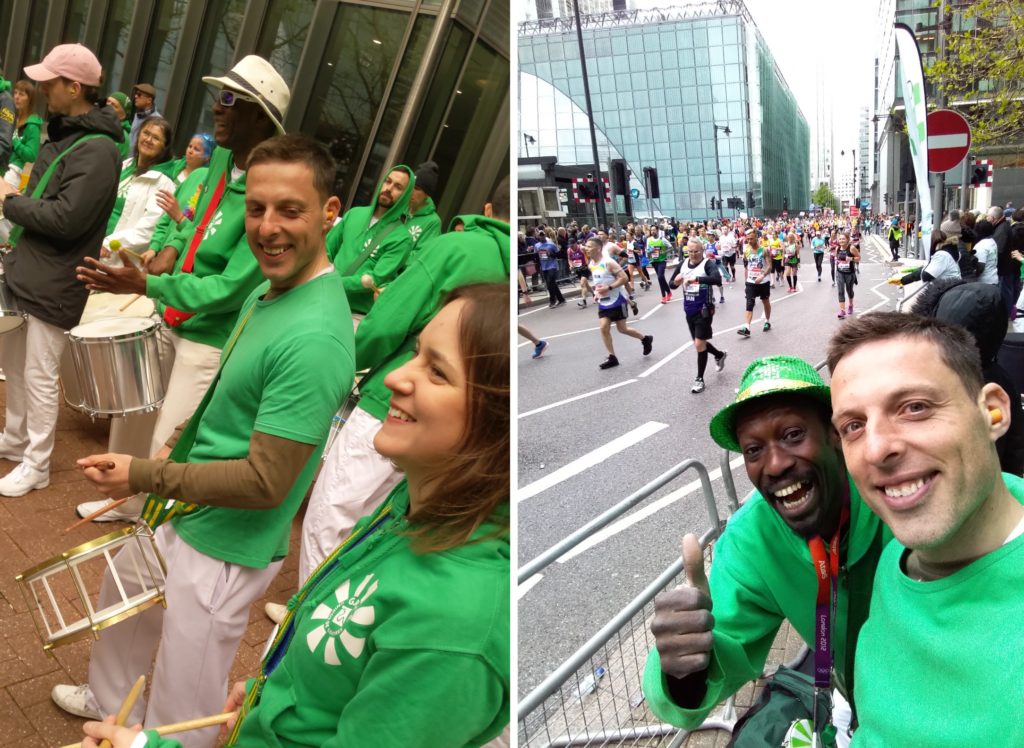 Need Support Getting In Shape?

Changing your body on your own without support or an effective system usually ends in failure….  don’t let that happen!…. become one of my coaching clients either online or in person…. let’s arrange a chat or sample session. I provide Holistic – Healthy & Sustainable Body Transformations

For coaching, nutrition and exercise plans online wherever you are in the world read more here>>>>

Battersea park was created in 1858. For me and many others Battersea Park is considered one of London’s most interesting Parks housing Battersea Zoo, Battersea Evolution Exhibition Centre and right next to Battersea Park Dogs & Cats Home and the iconic Battersea Power Station