The show starts out with some facts such as the UK is the fattest country in Western Europe with 30% of us obese. We are also suffering an epidemic of Diabetes.

The first test was getting some random members of the public to pick out what foods had carbs within them. As would be expected they were not overly good at it with most picking just the junk food on show or obvious high carb sources. Almost none of them knew carbs were in fruit and vegetables too.

This was followed by having people guess how many carbs were in each food as measured by sugar cubes. In typical TV show style there was “shock” and “horror” at the amount of carbs in simple foods they eat every day. This test was a little cheap in my opinion as by showing the amount of carbs in sugar cubes it implied all these foods were bad and evil. The show broke carbs into three main categories

All carbs are broken down into sugar molecules within the digestive tract but at varying speeds. The history of carbs was then traced back to the invention of agriculture when we first started growing then keeping crops.

A doctor was then brought in to discuss a theory that certain people can handle carbs better than others. So they took some volunteers and made them chew a non-sweetened cracker. They asked them to record how long it took for the taste of the cracker to change in your mouth. If it changes taste in less than 30 seconds you have high levels of carb digesting amylase in your mouth and thus should be able to handle carbs well.

What should we eat? The show looked into the issue of resistant starch and how much we were eating. This aids greatly in creating a healthy gut bacteria profile.

-To get more of this in your diet you can –

– Eat fruit and veg – Eat breads made from stone grinded whole grains without any added sugars.

– Freeze then cook your beige carbs as this increases resistant starch and decreases calorie and carb content.

They then touched on exercise and carbs which showed that holding a carb drink just in the mouth and not drinking it increased cycling performance. This was due to the body releasing more energy in the knowledge it had food waiting to come in to replenish stores.

The doctor pointed out that most people should not use any carb sources during exercise unless they were an athlete. If adding carbs in while trying to lose fat you are shooting yourself in the foot.

Photo – Follow the link to watch The Truth About Carbs>>> 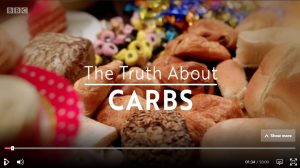 The highlight of the show for me was the section on Type 2 Diabetes. They visited a Doctors community medical plan to see how he has been tackling the health issue in the community with nutrition based plans. The Dr felt we all eat too much carbs and his plan was to sensible reduce carbs to needed levels through simple tasty meal plans. They cooked up some foods for us to see. Advice included replacing chips/rice/potatoes by green veg which still has carbs in it but much less of course. Other simple advice included –

– Use Squash over Potatoes

– Use Bulgur Wheat over white rice

– Use Aubergine over pasta (this was in Lasagne)

– Use Nut based base over a digestive biscuit base for deserts.

To see the effects of this they took a bunch of volunteers and put them on the plan. Most of them lost half a stone in two weeks and all their Diabetes markers made a massive improvement in just two weeks of a changed diet. I think this is great, it shows what can happen and how quickly when you make a move with your health and fitness.

The show ended by looking at carbs and their effect on colon cancer and fertility. It showed also how bad diet now can affect your kid’s future health  through changes in your genes.

This debate supersedes the carb issue to be fair as mother & father nutrition on all issues has clearly been shown to have a big impact on the off-spring. The book Nutrition Against Disease by Roger Williams which I found randomly in a book shop in Vietnam really opened my mind to the power of paternal nutrition to off spring health and the general influence of nutrition on health.

Overall a good show, It didn’t really get into any of the debate about carbs vs non carb approaches to health. I think this is a good thing, let’s not kid ourselves. The vast majority of the country are eating too much food in general. We eat too many carbs & too much fat and just need to cut back. Hopefully this show will help some people do that!